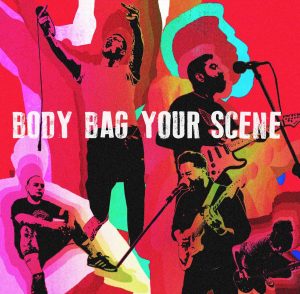 Pioneers of the Grime Punk subculture Riskee & The Ridicule released their critically acclaimed new album ‘Body Bag Your Scene’ in June 2019. Described as “a bombshell of challenging themes” (Kerrang!) and “a focused assault that hits you in the heart like a hammer” (Mass Movement) – the band will continue to tour the UK, Europe, internationally and festivals throughout 2020 with a headline show at The Underworld, London on 25th January 2020.  Body Bag Your Scene is available now on Spotify, iTunes, Google Play, Deezer, Bandcamp and more!

If you are out of the loop you can listen to our previous album Blame Culture on iTunes, Spotify, Amazon, Deezer and Bandcamp and you can also listen to the first album Dawn Of The Dog on the same outlets.

Here you can see our up coming gigs that we would love to see you at – buy tickets now:
UK

Riskee And The Ridicule released their debut album, Dawn Of The Dog, in 2014 it propelled them to tour the UK and Europe multiple times, including momentous sets at Indigo in the iconic O2 Arena and The 100 Club in London as well as supporting The King Blues on their return tour in 2016 and again in 2017.

The social and political climates have changed even more drastically since the release of Dawn Of The Dog and Riskee and The Ridicule are acutely aware of it. They followed up with second album titled Blame Culture and it delivered honesty, energy and thought-provoking material that we all need today, as the band elaborates on:

“Not being scared to say what you think is vital and if there was ever time that music needed to say something, it’s now. With so much music around that says nothing, someone should be leading the opposing charge. The new album follows a story and brings a point across that anyone living through the political turmoil we are facing at the moment will understand.”

Now they have delivered their third album, Body Bag Your Scene, again made possible by the fans that has gone to the next level – taking the foundation of Dawn Of The Dog, the evolution of Blame Culture to deliver a mature, hard hitting sound. Catchy hooks matched by hard hitting lyrics on important social, political and racial matters pushes new boundaries for the band.

Receiving critical acclaim already from maximumvolumemusic.com, originalrock.net and threesongsandout.com, Riskee And The Ridicule to smash on the door of the standard music scene, waiting for everyone to wake up.