Pioneers of the Grime Punk subculture Riskee & The Ridicule released their critically acclaimed new album ‘Body Bag Your Scene’ in June 2019. Described as “a bombshell of challenging themes” (Kerrang!) and “a focused assault that hits you in the heart like a hammer” (Mass Movement) – the band will continue to tour the UK, Europe, internationally and festivals throughout 2020 with a headline show at The Underworld, London on January 25th. 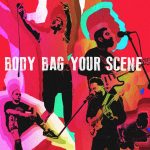